Brindle + Black is a magazine dedicated to living, eating, and shopping in Sumter, South Carolina! 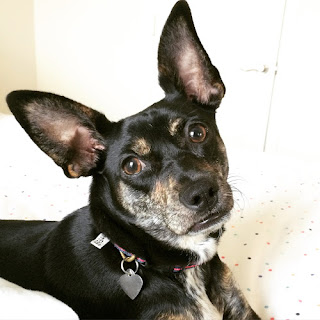 Why Brindle + Black? After lots of research on the sorts of names that would denote Sumter or South Carolina, we decided that all the good ones were taken. So, instead, we named Brindle + Black after the coloring of Sarah's beloved rescue dog, Miranda (pictured left).

About the Editor: Sarah J. Jones is a Sumter native who has recently moved back to South Carolina. She is a graduate of the University of South Carolina in Columbia as well as the Fashion Institute of Technology in New York. Sarah spent 6 years as a fashion designer in New York, then four more years working in Atlanta as a children's accessories designer and an illustrator at live corporate events. Returning to Sumter and starting Brindle + Black is an exciting new Adventure for Sarah, and she hopes to impart this enthusiasm for her hometown to readers and advertisers alike!
Home